You are here: HomenextTopicsnextChronology of Glendalough Mines 1795-1883 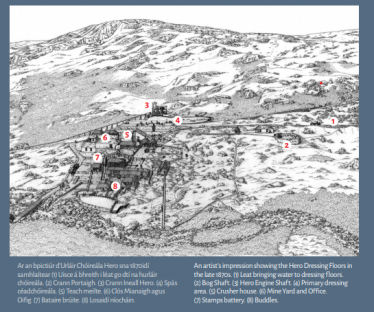 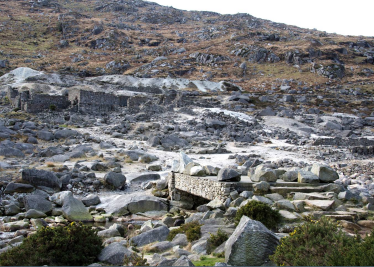 Weaver formed a partnership. It is not known how much lead he extracted but he does refer to a discovery of great width up to several tons. There was probably never any great exploitation due to lack of capital and difficulty of access. After he sold out to the Mining Company of Ireland (MCI) he went on to conduct geological explorations in Mexico and U.S.A. He wrote on various geological and paeleon­ological subjects including fossils of Giant Irish Deer

2 miners involved in re‑timbering Weaver’s edit trapped by a fall of rock and had to await 33 hours before being released. Part of the delay was caused by the fact that at least for 6 hours nobody knew until the next shift arrived. This rescue also included miners from Glenmalure who arrived as soon as they heard

Dressing floors built at the site

Railway laid in the mine itself for wagons

Accommodation built for agents and workmen

Hero mine opened to 30ft

Government dropped excise duty on lead imports, the price of lead dropped from £30 to £16 per ton which discouraged exploitation and exploration for the next few years

Contract received from the Wicklow Grand Jury to build a road from Glendalough to the entrance along the bridle track that went over the Wicklow Gap. From 1834 the 1832

MCI who had closed their lead mine in Kildum in Co. Donegal (through flooding) transferred the water wheel to Luganure

Ruplagh was opened with a pump house and machinery

Rev George O’Connor P.P. Glendalough submitted an application for the 8th National School built in the county. Cost £67 to build and the MCI contributed £1

Little documentation but Robert Kane reports that Old Luganure and Hero had ceased production which centered in the Ruplagh complex. He states that ore is raised by hand labour and machinery as was the dressing and then taken by cars to Ballycorus for smelting. The machinery was powered by a rivulet sourced from Lough Nahanagan. The veins at the head of Glendalough valley were known at this time but were not worked

The number of houses 269

Parliamentary Inquiry 1841. The inspector found that the 2 places in Ireland without child labour were Avoca and Glendalough. His report for Glendalough showed that neither children nor women were employed. The mine manager was clearly dissatisfied with this state of affairs stating that he had offered to advance money to buy clothing to enable them to come to work without effect. He is quoted as saying that they were too proud but attributed it to laziness even though they had but a bare subsistence. However this should be seen in the context of the total economy of the area of which tourism played an important part

Visit of Fr. Matthew the Temperance Apostle had a deep effect on the people. At this time droves of people gave up the use of alcohol.

The mines continued unprofitable reaching a low of £3 per ton

Fortunes started to turn for the better, with the improvement of lead prices small profits were made and rapidly increased

Old mine workings re-opened and a new crushing mill erected. From then on extensions and new machinery was invested

Reported that £1,000 per month in remittances was being sent back by miners who had emigrated to Australia from the county

MCI purchased a further 5,000 acres in the area to prevent claims and liabilities of an onerous character – paid out of net profits which shows growth in confidence

Anonymous publication gave a positive report of the mines with one of the first maps of the area showing the main workings (but not anything on surface workings, in common with all known surviving maps)

Refers to the first explorations of the Van Diemen’s Land lodes as well as adits driven into Camaderry from the Glendalough valley. At this stage the Luganure deep adit had driven under the mountain’s watershed. This part of the mine was the easiest to work due to natural drainage and ore was extracted on railways with one mule drawing 3 wagons each

MCI started to develop an interest in forestry with a planting of 150,000 trees. The trees planted were larch and fir and by 1867 they had planted a million trees at a cost of £8 per acre on about 200 acres. While this was to provide timbering for the mines it was also planned to supply the general market. In 1867 the forestry was valued at £10,000 by Lord Powerscourt’s forester. It was at this period that they were making £7‑8,000 net profit per annum and raising up to 2,000 tons p.a. Insufficient housing was now a problem and the well known Fiddler’s Row was built (so called because, by tradition, every house had a fiddler). In 1860 they took out a year lease to explore the Glen of Imaal which proved to be negative

Luganure adits connected with the Glendalough valley. Major advantage as ore could be processed in Glendalough valley, saving the awkward path from Luganure to Old Hero which became the main dressing centre for New Hero, Ruplagh, Moll Doyle and Foxrock which were further developed in the decade. There was also constant development of dressing techniques

Announced a six-month net profit of £2,661 with a comment that “The operations at Luganure do not call for any special mention…”

Presentation made to Rev O’Neill of a crozier made from St. Kevin’s Yew by the miners

Building gained favourable comment in the Freeman’s Journal of 8 August – noted that formerly the place was noted for its tumble-down cottages which were indistinguishable from the surrounding heather. Underground works were intensely carried out in this decade.

Death due to a fall of earth in Luganure

School completed – last to be built possibly because they did not wish to cause conflict with existing schools. January 1864 report is worth quoting ‘Visitors should go away with the impression that not only do we contribute to the material wealth of Ireland but to the improvement of the intelligence, morality and good habits of the people. There will be no interference with the religious opinions or the prejudices of the children. There will be a 3 guinea reward for good conduct, cleanliness, regular attendance and subordination to the teachers and a further 2 guineas for the most progress in learning’.  Obviously greater emphasises was placed on pliant rather than intelligent students. They mention in passing that there was a weekly deduction of 1/‑ per week for a sick fund for the relief of poor people

Between 1864 and 1899 76 miners are registered as having died in the Annamoe registry district. It is likely that this is an underestimate as there is a known shortfall in death registration in this period

MCI reported that there were no Fenians in its workforce

The inclined railway built to Van Diemen’s Land site in fact superseded another tramway on the southern side of the valley which was described in 1860 as ‘almost a perpendicular line, awful to look at – wagons are rattling at a fearful speed’. The same source passes ‘poor pale faced miners who look up as we pass with lustreless eye’

Van Diemen’s Land site (miners’ nickname) was developed further with an inclined railway costing £2,300. This crossed over the river and was a major improvement to the mule track on the southern side of the Glenealo river (a culvert survives, the path below has been almost eroded away). The MC1 estimated that carriage would be approx 2d per ton as compared to several shillings by pony

Turning point in the fortunes of the mine and the company in general. Production dropped due to emigration of the most experienced miners – due to better wages in the U.K., U.S.A., and Australia

In 1883 it was reported that many had emigrated to the U.K. and America while others, approximately 30‑40 were working in the Balleece quarries near Rathdrum

William Wilde reports that many miners assisted him in his repairs of various buildings of the Monastic City and some of the carved graffiti in St. Sepulchre’s come from these

Production down due to drought which caused failure in power, steam power was to be investigated. The next 2 years brought some losses

The population rose over the period to a peak of 1,659

Death due to spinal injury

George Booth, Laragh House, was writing to complain to the Lord Lieutenant saying that the miners get paid on a Saturday, get drunk, and indulge in a succession of free fist fights and that the regular R.1.C. force was not sufficient to cope. This resulted in a report by Constable James Dwyer who stated that a miner named William Pim was assaulted by George Hyland and was sentenced to one month’s imprisonment (the standard sentence) but before the issue of the warrant he had absconded to England. He further describes an incident between 2 brothers, John and Hugh Kenny, who were fighting in a licensed premises belong to Richard Mahon. He attempted to separate them, at which point the two brothers commenced to assault every man they met. They wantonly assaulted 2 other miners named Patrick Dealin and Cornelius Hopkins. This now lasted for about half an hour and on several occasions during that time ‘both Kennys threatened Sub Constable Irwin and I that if we interfered with them they would stretch us for dead on the road. 1 did not consider it prudent to arrest the Kennys as I was too far from my Station’. As a result a contingent of constables from Roundwood patrolled the district during paydays

New forge was built between Hero and Ruplagh and further economies in dressing machinery which cut labour costs. From then the MC1 went rapidly downhill. The price of lead had been dropping over the period due to imports from major lead mines in the rest of the world and all the enterprises were suffering due to the recession of the period

By July the situation (crime) deteriorated and James Dwyer was reporting that 5 miners were serving one ­to two and a half months for offences ranging from drunk and disorder to assault. These were Thomas Grafton, John McGrath, William Brown, James Farrell and John Kenny (45)

Mine was reported to be at a stand­still and the following year the company had lost £6,351 over the previous 6 years

Employment had fallen dramatically – the mine manager was also the travelling officer, reason given to save money. Later in the year they report that the paymaster, purser, and surveyor had also been made redundant

Against the wishes of the Directors, the shareholders set up a committee to decide if the mine should be abandoned. Committee included some of the main dissidents among the shareholders who complained that the MCI management were using the recession as a scapegoat for a company that was ‘honeycombed with inefficiency’; another complaint was the constant claim that ‘their was hope for the future and good prospects’

New Board of Directors (after a coup) who after reporting a £2,545 loss put in a major cost cutting programme

Continuing fall in the price of lead worked against them and the mine and company collapsed.

Reported that many miners had emigrated to the U.K. and America while others, approximately 30‑40 were working in the Balleece quarries near Rathdrum