You are here: HomenextPlacesnextGlens of Lead ... Glenmalure 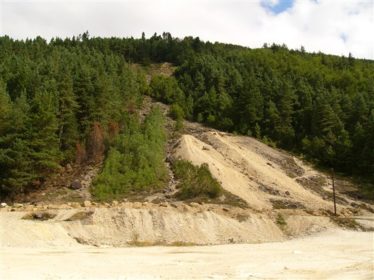 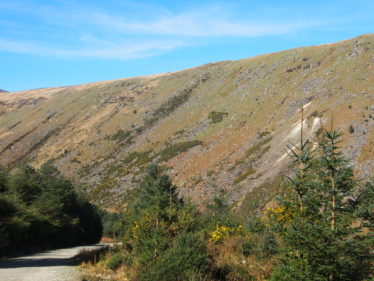 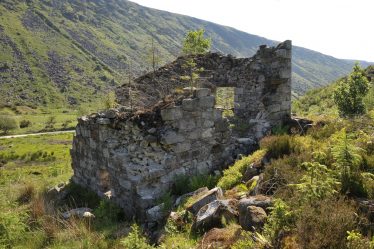 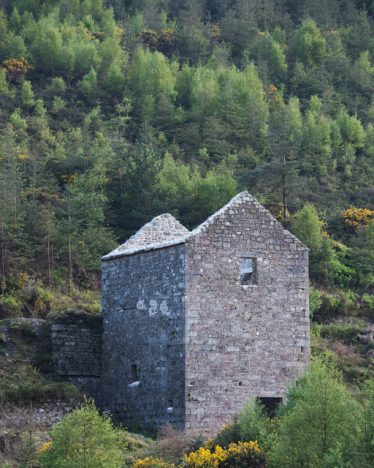 Ballinafunshoge Mine was the earliest mine in operation in Co Wicklow and was the most productive mine in Glenmalure. Lead mining began at this mine in the late 1700s and continued to operate in a ‘boom and bust’ pattern through to the end of the 19th century.

The furnace and chimney of the smelting house at Ballinafunshoge would have been a prominent feature in the area. However, all that now remains is a stone wall built into the bank near the Mill Brook at Ballinafunshoge Recreation Area. It is reported that during the 1798 Rebellion rebels stole timber from the roof of the smelting house to repair the handles of their pikes. This building was later used as an office for the mines, also accommodating some mining families. A well-documented tragedy occurred there on 23 March 1867 when a landslide washed away a miner’s cottage resulting in the loss of two children.

In the forest on the opposite side of the Glen Road lies the remains of the old crushing and grinding plant which was powered by a waterwheel, fed by leats from the nearby Mill Brook. A railway system operated at Ballinafunshoge to bring the lead to the surface in ore carts. These wagons were also used to transport tourists underground to visit the chambers of the mines circa 1822. A cast iron wheel from one of the wagons was discovered on the spoil heap in 2014.

Many local place names date back to the mining era, e.g. Schoolhouse Bank, the Flooring Bank, the Mill Bank and the Smelting House Bank.

In 1851 the population of Baravore was 278 people living in small dwellings built by the mining company. Local folklore claims that 100 lights were carried across the paved ford in the River Avonbeg as mining families made their way to church services on Christmas morning.

The New Crusher House is a major feature in the valley and is the best extant example of a 19th century rolls crusher house in Ireland. At over 11 m in height, its consolidation in 2016, under the BHIS (Built Heritage Investment Scheme) co-ordinated by Wicklow County Council and funded by Coillte and the Department of Culture, Heritage and the Gaeltacht, was a challenging project. That same year the Crusher House was selected by the National Heritage Council for inclusion in their first Adopt a Monument Scheme.

As part of the works in the area Coillte has developed the Heritage Looped Trail which links this site to old mine workings and buildings on the hillside.