You are here: HomenextPlacesnextGlens of Lead ... Glendalough 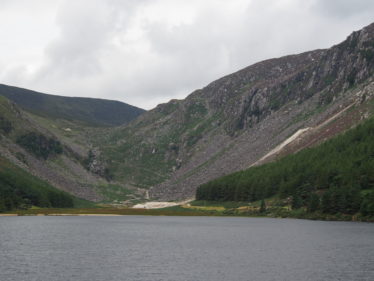 zoom
View of the Glendalough Mines, the Zig Zag Pathway and Van Diemens's Land Mine at the head of the valley
Joan Kavanagh 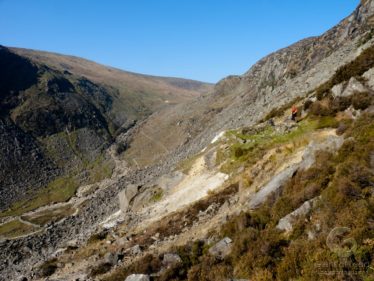 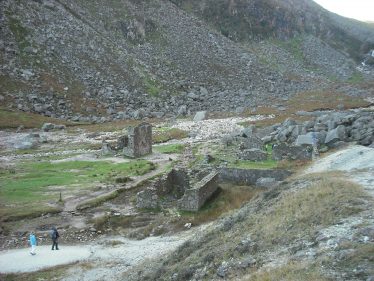 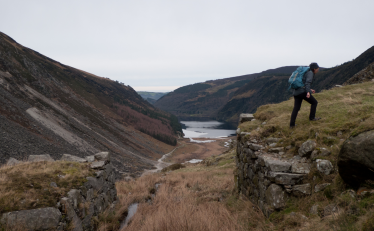 The Camaderry Mountain separates the two valleys of Glendasan and Glendalough and their associated mines and processing plants.

The Luganure mineral vein cuts across the Camaderry Mountain and the workings in the two valleys were connected by tunnels and shafts with a slope towards the Glendalough valley to aid draining and movement of ore by gravity to the processing works in the Glendalough valley known as the Miners’ Village. The term Miners’ Village is a misnomer as it is unlikely any miners lived in the area except for a caretaker or other non-permanent workers.
Exploration work started in the Glendalough Valley in the 1850s with the construction of a second set of buildings including a waterwheel house and crushing mill. Over a hundred and sixty years later the National Parks and wildlife Service carried out very necessary remediation works on the crushing mill.
Workings further up the Glendalough valley were developed and these upper reaches of the valley were aptly named Van Diemen’s Land by the miners because it seemed so far away from civilisation.
The 1860s saw the Mining Company of Ireland (MCI) build a school for the miners’ children whose purpose was to provide ’good efficient company servants’.
Mules were initially used to carry materials up the steep mountain side and bring the ore down. This was later replaced by an inclined railway which resulted in greater efficiency and productivity. Although mining in this valley only lasted for approximately 20 years, the mined lead continued to be processed here into the 1900s.
Mining operations were becoming increasingly limited from the early 1880s onwards and there are records of sheep being brought in to graze on MCI lands in 1883-84 in an attempt to make some money out of the land. The lease on the surface land belonging to the MCI was sold in 1889 for “forestry, sheep and rabbits”.
Reworking of existing waste tips continued for a few years after mining ceased but by 1900 all production of ore had stopped.
It is likely that with the end of mining at the site any items of value would have been taken away, though there may have been some delay while there were still hopes of restarting the mines. Portable material such as roof slates and timbers may have been carried away for use elsewhere, speeding up the process of decay of the buildings.
Before the outbreak of WW1, in 1913 new machinery was imported on to the site to crush and extract further ore from the existing spoil heaps. As far as can be established water was still required for washing and separation functions and driving machinery and the main spoil heaps seen today date from this time.
From the 1920s the processing plant included a large timber shed which would have enclosed machinery but this was destroyed in a severe storm in 1935 resulting in the site being finally abandoned, thus ending the industrial age in the Glendalough Valley.