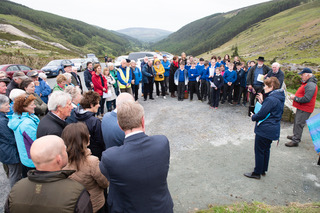 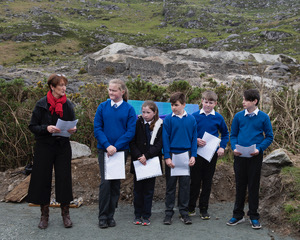 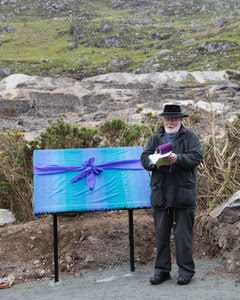 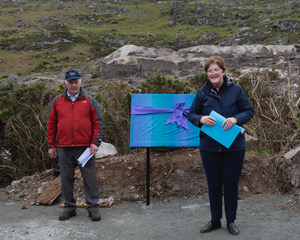 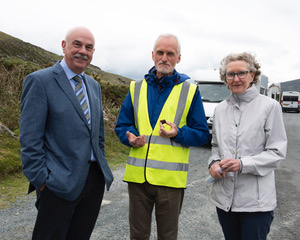 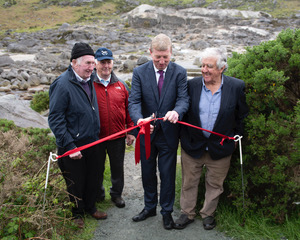 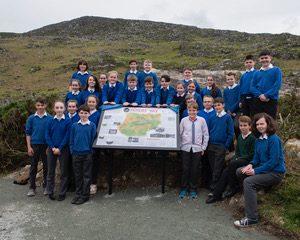 A great day of celebration was attended by over a hundred people on Friday 7 June at the launch of the new Miners’ Way Trail in the Wicklow uplands. This 19km linear way-marked trail traverses the three valleys of Glendasan, Glendalough and Glenmalure with a focus on the mining heritage in these areas.

The initiative was spearheaded jointly by two local voluntary groups, the Glens of Lead group and the Glenmalure PURE Mile group, and received funding from the Department of Culture, Heritage and the Gaeltacht’s Rural Recreation Fund. However, the much wider collaboration behind the project was reflected in the wide variety of bodies that were represented at the event which included County Wicklow Partnership, Wicklow Mountains National Parks, Coillte, PURE Project, Wicklow County Council, Wicklow Uplands Council and Mountaineering Ireland.

The launch itself had a rich communal feel to it with Trail Head Information Panels unveiled and ribbons cut at Glendasan and Glenmalure by Minister Andrew Doyle, Deputy Pat Casey and former miner Robert Carter. Proceedings at both ends of the trail included poetry recitals by local poet Jane Clarke with her poem Fox Rock Tunnel, dedicated to Robert Carter, and pupils from Scoil Chaoimhín Naofa who recited Fiddlers’ Row, written by former miner, Charlie McCoy. Many of the children had family connections to the miners mentioned in the poem. Robert Carter gave a short history of mining in the area and spoke poignantly about his experience working underground and recalled the tragic accident which killed his friend and colleague James Mernagh. A minute’s silence was observed in memory of all those who lost their lives in the mines and the trail was blessed at both ends by clergymen Fr. Oliver Crotty, Fr. Arokiasamy and Revd. Brian O’Reilly.

Lasting the whole afternoon, the celebration which had begun at the Start/Finish point in Glendasan, then moved to the Start/Finish point at Baravore in Glenmalure where Rural Recreation Officer Bryan Fennell gave a short overview of the project. Minister Andrew Doyle, when unveiling the Miners’ Way map and sign with Deputy Pat Casey, T.D. congratulated all bodies involved for working together so well to achieve great things for these valleys.

Coillte Area Manager, Peter McGloin unveiled the new Coillte sign at Baravore relating to the Baravore Mining Looped Trail. This is the shorter mining trail in Baravore which was opened in 2017. It begins at the footbridge where the Miners’ Way ends and follows the old mining trail through Coillte lands past the Crusher house. Wicklow County Council Heritage Officer Deirdre Burns spoke of the importance of the project and commended all involved. Local historian Carmel O’Toole gave a flavour of the mining heritage of her native valley and recited Sean Healy’s poem, One Hundred Lights.  She paid tribute to the landowners involved along the route, for their support and co-operation, the National Parks and Wildlife Service, Coillte and Wicklow Co. Council. Without their goodwill, she said, there could be no Miners’ Way. At this point a great sense of occasion was created when the hundred or more people present walked the first few metres of the trail along the footbridge which crosses the Avonbeg River, led by local piper, James Byrne. Local hill walking enthusiasts, Jim Devitt, Winnie O’Neill and her niece Niamh Byrne walked this new route on the day and were greeted with rapturous applause when they arrived in Baravore just in time for the unveiling ceremony.

The celebration concluded with welcome refreshments back at the warm and friendly Glenmalure Lodge with more poetry readings and traditional music provided by Eugene Fitzpatrick and friends. The Miners’ Way Information Leaflet was officially launched by Jim Byrne, native of Bolenaskea, Glenmalure, who was deputising on behalf of Councillor Pat Kennedy who was not available. This attractive and informative leaflet shows a clear map of the trail together with an account of the mining history and local amenities in each of the three valleys. It is available free of charge at Glendalough Visitors’ Centre and in tourist offices and local hotels and B&Bs in Glenmalure and Glendalough.