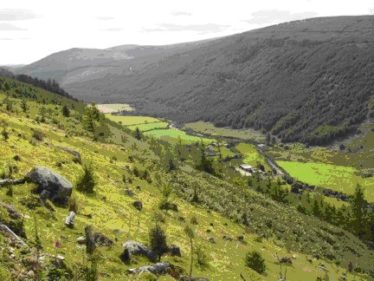 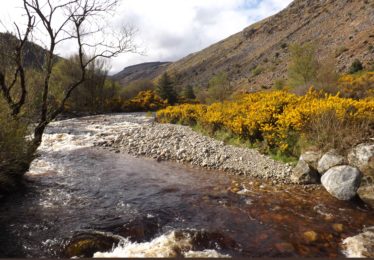 All along the valley floor,

They will shine for evermore’.

You would hear a pin drop at Baravore ford in Glenmalure as local poet Seán Healy recited the entire poem to the more than one hundred hardy souls who braved the elements and attended the 100 lights walk on Saturday January 6.

This inaugural event, organised by Glenmalure PURE Mile group was attended by many from the local community who were joined by members of An Óige and Friends of Glenmalure Hostel in addition to hill walkers, visitors and representatives of the Glens of Lead and Glen of Imaal Mountain Rescue groups.

Following Chairperson Pat Dunne’s words of welcome, Carmel O’Toole gave an outline of the social history of the mining enterprises in the area and explained the context of the tradition of the one hundred lights.

Then Seán  recited his poem “100 Lights” with passion and feeling, which tells the story of these poor mining families who had little luxuries in Baravore in the mid 1800s, as they endeavoured to make a living  but who, nevertheless, walked together for up to nine miles to  attend church services together on Christmas morning in Greenane and Ballinatone.  One hundred lights were said to cross the ford at Baravore.

After rapturous applause and some tears, the group led by Mountain Guide, Charles O’Byrne, crossed the ford, which was decorated with one hundred candle lights, and proceeded along the new looped mining trail walking into the dusk of the evening, each carrying individual lights. At the Crusher House a brief outline of its history was given and of the recent restoration works co-funded by Coillte and National Heritage Council.

Afterwards talented local musician Eugene Fitzpatrick, himself a former warden at the hostel in Glenmalure, led those gathered to a feast of entertainment. Seán Healy sang some ballads about Glenmalure, Jane Clarke recited some of her own poetry and many others joined in the evening of stories, poetry, music and song. A most enjoyable evening was had by all and many were reminiscent of similar gatherings held in the hostel building years ago by Maud Gonne McBride and Dr. Kathleen Lynn, some of which were attended by the famous poet, W.B.Yeats.